ouzo on the rocks 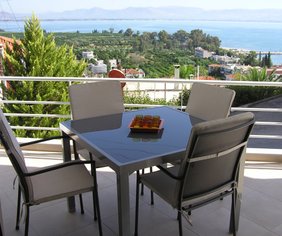 Apartment for rent in Argolida (Peloponnese)

The apartment is 80 m² and has two bedrooms (one double bed and two single beds), so it fits for a maximum of 4 persons. There is a fully equipped kitchen and an upscale bathroom. The beautiful  view from the balcony is overlooking the village and a walk to the sea takes only 3 minutes. Kiveri has very good tavernas, a supermarket and a bakery. Behind the apartment you will find a spacious patio.

The apartment is stylishly decorated and there is everything to make your stay as pleasant and comfortable as possible. In summer but also in winter.

You can book directly via email or via airbnb

Everything you need for a pleasant and comfortable stay is in the apartment. There  is a TV-set, DVD/CD player, airco and central heating. The kitchen is equipped with a fridge, ceramic hob, dishwasher, convection/grill oven and a microwave.

One bedroom has a double bed and one bedroom has two single beds. Obviously there is enough linen.  We will take care of washing the linen, the towels etc. The washing machine is for your own laundry.

Kiveri is a traditional fishermen's village about 14 km from both Argos and Nafplion. You'll find all the ingredients for a relaxing holiday: taverns, seafood restaurants, ouzeri's, crystal clear waters, an attractive harbor and a beautiful (pebble) beach. There are also several shops for groceries. The apartment is located in the village so  you are part of the village life. You will be surprised by the hospitality of the people. Especially when you are visiting the kafenion, the ouzeri or one of the two churches.

Almost the entire year, you are one of the few visitors and you can enjoy the tranquility in this typical Greek village. Only in July and August, with the arrival of mainly Greek tourists, Kiveri gets nearly the allure of a true beach resort. 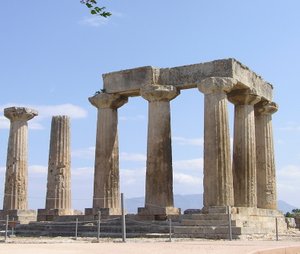 The Peloponnese has many archaeological sites. We organize excursions to both the well-known sites such as Mycenae, Epidauros,  Olympia and Corinth, as the little-known, but no less interesting places like Nemea, the Heraion of Argos or Hysiai, Dendra and Midea.

The Peloponnese is for many the most beautiful part of Greece to meet with Greek antiquity. What about the famous and popular sites Mycenae, Olympia and Ancient Corinth? Or the magnificent theater of Epidaurus?

But in addition, we can show  you and tell you all the details of the smaller (and especially less crowded) archaeological sites as Tegea, Hysiai, Orchomenos, Mantineia and Midea, Dendra and the Heraion of Argos.

Besides the Greek and Roman antiquity on the Peloponnese remains can also be found from the Byzantine culture in cities such as Monemvasia and Mistras.

Delphi is not on the Peloponnese, but a visit to the Temple of Apollo (the oracle) is doable in one day. It does mean an  early rise and a considerable travel time.

Nafplion was the first capital of the free Greece after (around 1830) the Ottomans were defeated. This city also shows influence from the days when the Venetians  held sway. Nafplion is one of the most picturesque towns in Greece.

But also the lesser known cities have their attractions such as Argos, which has not much to offer at first glance, but on closer inspection turns out to be one of the most interesting cities in the Peloponnese.

You will find some big cities such as the ports of Patras, Corinth and Kalamata. The smaller cities such as Argos, Nafplion, Nemea, Monemvasia and Epidaurus have much more to offer on tourism.

Do you like to stroll through the towns  and do you want to hear the specific details up close? You don't want to  take the same path like all the other tourists?  Then Ouzoontherocks is your companion.

We know where you can eat the best ice cream in the backstreets, in which ouzeri the best tsipouro is given and of course we do not forget  to watch the well known highlights as well.

And since we're in the area where the best Greek wine is made, we will of course also taste some. 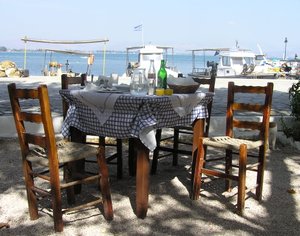 We organize nature walks for small groups (up to four people). During the "walk of the shepherds" we take you through an area where you do not easily come without a guide.

Additionally, you can contact us for city tours, for example Nafplion.

Of course, you want to relax a lot during the holidays. Here in the northeast of the Peloponnese you can - besides everything else - surely enjoy all the delicious (regional) dishes and wines.

Additionally, you can stroll on deserted beaches, do some bird watching or even take a mud bath. The quality of bathing water across the province Argolida, according to the European Environment Agency, the qualification "excellent".

And by the way:

The Lonely Planet travel guides elected the Peloponnese as the best 'must go'  destination of Europe for 2016.

A stay in Argolida  is excellent opportunity for a combination of visits to other provinces such as Arkadia and Korinthia. In this way a combination of an archaeological site with a museum or a city tour is very well possible.

The museums in the Peloponnese are generally small but usually they have an interesting collection. Did you for example see Midea and Dendra, then a visit to the Archaeological Museum of Nafplion is very worthwhile.

But a stroll through a city like Argos is itself a combination of old and new as you encounter everywhere in the modern city and remains from the Classical and Roman antiquity.

Click here for my photo album on archaeological sites, museums and Greek nature